February and early March have been rough around here weather wise. I know, I know, per the calendar, it is still winter. But normally by now there are some hints that spring is coming.

This year, though, winter has been digging in its heels and NOT letting go. As shown here last Monday after Thunder Snow (A snow laden thunderstorm) hit.

This can make it hard to work out….

In fact, many people hibernate for the winter, and refuse to exercise at all. You hear laments about it being too cold, or the dark depresses me, or if only the rain would stop! And this comes from people who work out in the gym! For us cyclists, it is just damn tough to find a nice icy time to ride.

In fact today called for more snow! It didn’t stick but it sure came down.

I have posted many times in the history of this blog when I have ridden in the rain and yuck. 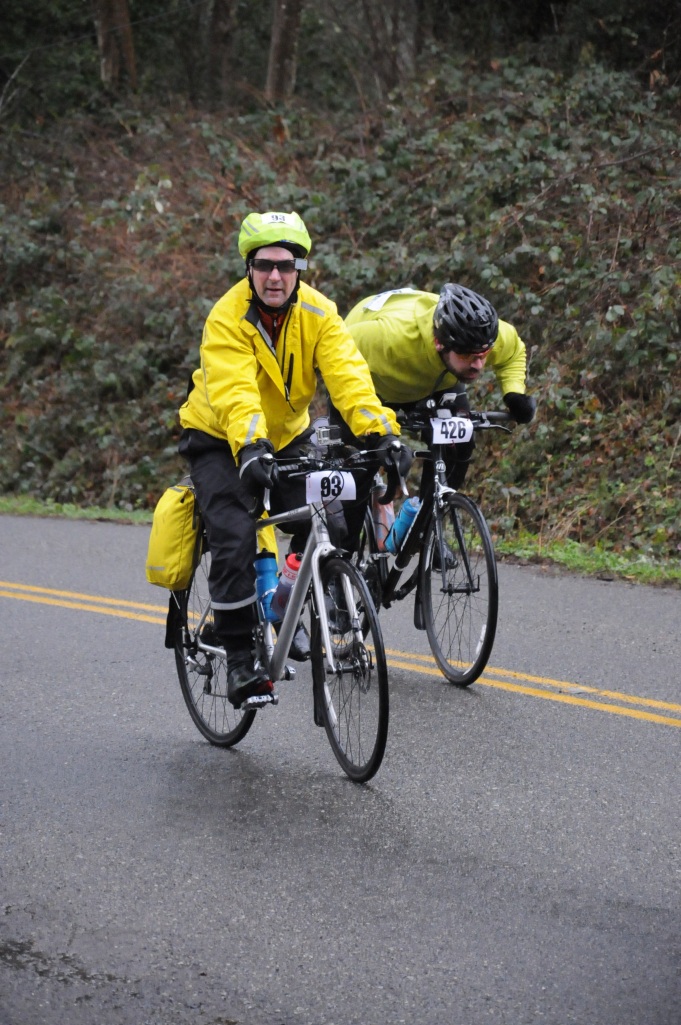 As I always say, if we in Seattle don’t ride in the rain, we would essentially give up the freedom of 2 wheels for about 5 weeks.  That is just NOT an option for me.  Nor for others that I run into in my travels. These folks were waiting in the rain for the ferry with me!

But I’d be lying if I told you only cyclists are tough!

Last Sunday was the Hot Chocolate 5K/15K in Seattle

Michelle has been hitting the gym, and getting outside since the new year getting ready for this. And being the adventurous chick that she is, she of course signed up for the 15 K (for the metrically challenged, 15 kilometers is 9.3 miles!)

But of course, with the weather we have been having, the day dawned colder than hell, windy, and threatening rain! Michelle was excited!

Like I said it is ALL about the layers, she was ready for anything!

Being the dork that I am, I get us places early. I HATE being late or stressed trying to get somewhere! So of course we were there well before the beginning of her race. In fact we were there for the start of the 5K event. We knew our good friend Jill was going to be there, as she is doing 13 5Ks in 2017. (Another tough chick!)

I was keeping an eye for her as we walked around, and for her hubby Scott. Scott and I go back 35 years to our first year in WSU! 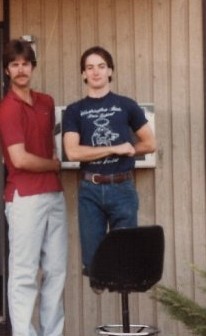 And I knew if Jill was in the event he would be there to cheer on. Well. I found him all right, but not in the cheer section. That man among men, the big guy, my buddy, was loaded for bear and in line to complete the course! 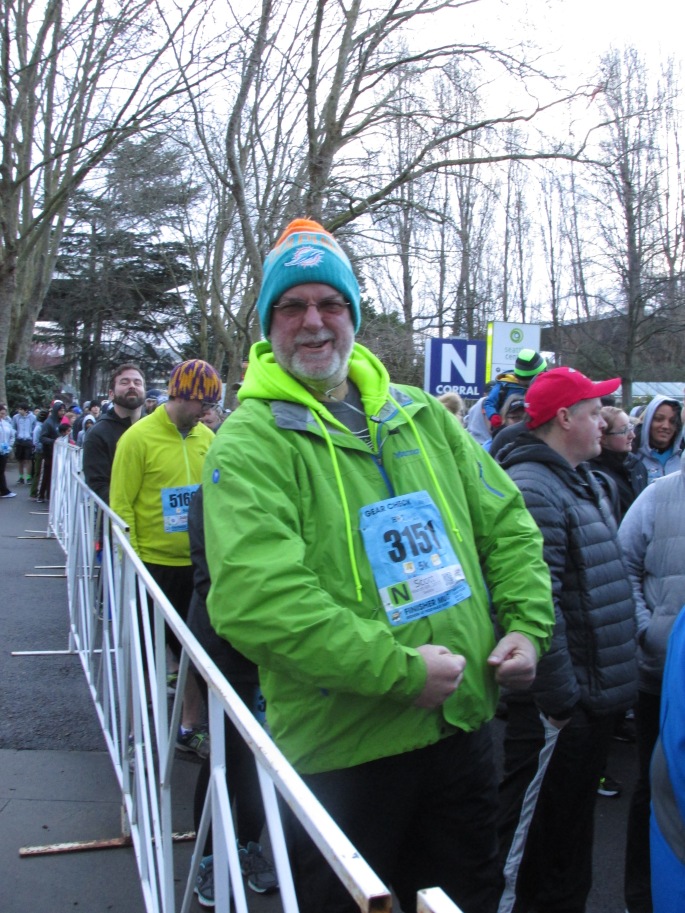 That’s right, along with our tough chicks, he was one tough SOB! And he was geared up as well for the weather! Damn proud of that boy! (It should be noted here, after I saw Michelle off for her start, I was heading for a coffee shop to stay warm! I was tough LAST week!) Yep he did finish!

Well after we cleared these folks off, Michelle was ready to go. I was at the front ready to yell “Go Baby GO!” and let me tell you she had her game face on!

OK, I have complete faith in her, and I knew she would do it! But I will also admit, given the weather conditions and the cold, I was happy to see these guys on bikes riding herd!

In other runs, I have been able to ride herd myself (I will be next month in Corvallis) but this route was closed to bikes, I couldn’t be there.

This means, even though she had a great view of the water front, she had NO shelter from either the wind or the rain (if it hit!) What a crappy winter time course! She said the wind was NOT good!

Well a two coffees and a sea salt pretzel later (Yep I had it rough) I could see by the tracker app we use it was time to head back. For over 2 hours, the weather gods had smiled on us, and the rain had held off, but it was trying hard to start!

I kept watching for her, hoping she had had a good event, when there she was! 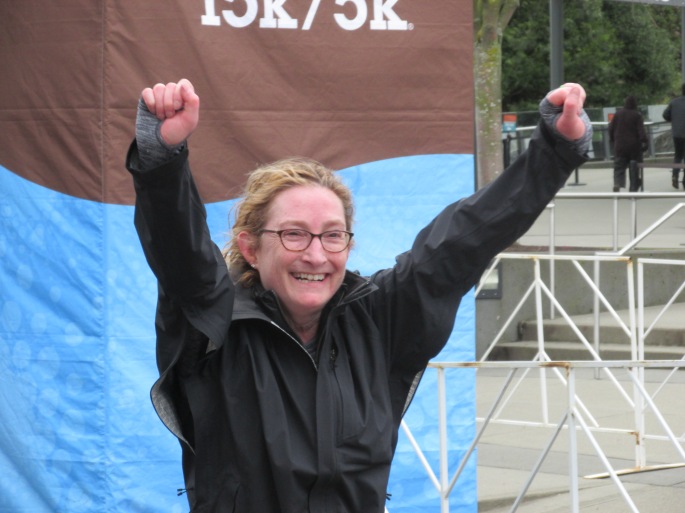 The game face switched over to HELL YEAH I DID IT!  A huge smile, plus she was moving really well. Her training, ever with the butt cold temps paid off. Then there was of course the medal!

Everyone loves a medal!

We made our way to the finish area for her steaming cup of hot chocolate! Life was good, and she was still smiling!

It was time to head for Diamond Knot Brew Pub for a big victory breakfast! And wouldn’t you know it, when we got there it was Snowing!

We debate often over who is tougher. I think her half marathons are MUCH harder than my century rides! I get to coast going down hill, she has to keep her legs moving the whole time. But she tells me I am working for a whole lot more hours in my events than she does in hers.

Either way, the important part is we are there when each other needs us, standing at the finish line, smiling, yelling and being proud!

Bottom line folks, Michelle and Scott and Jill (wish I had seen her for a photo!) showed how tough we Northwesterners are! Rain don’t stop us!

7 thoughts on “We grow’s them TUFF up here!”