Folks, there truly are such things as first world problems.  You know the ones: Internet is down so you can’t read my blog posts (which I am sure is your favorite!). The Starbucks App won’t pre-order so you actually have to stand in line, or the iPad dies just as you get to the best part of a book on the Kindle app…

For 2017, my recurring 1st world problem as revolved around the GoPro…

As you may or may not know, I picked up the GoPro last year with the REI dividend.  I have always wanted one, and Michelle (as she always does) encouraged me to get one. There is, of course, a learning curve. And I did have some strange shots.

And it is NOT always stylish….

But I have had a good time with it, both on and off the bike

It is fun to look back on rides and see what you may have missed, or to find those things you saw and HOPED you captured!

Well, being year two, I had some high hopes for the GoPro! I had signed up for a new ride, The Tour de Blast, and I had hoped to get some great photos and video…  But those first world problems…

So there we were. one of our last days at Canon Beach this last April

As you can see the tide was WAY out, and I was excited to get some underwater tide pool videos! I took out the camera, turned it on and NUTHIN….  I had left it on earlier in the week, and forgot to charge it!  DAMN!!! It was still fun on the beach, but I was bummed, I love tide pool movies now!

OK, June rolls around, time for the Tour de Blast, a ride up to Johnston Ridge Observatory and back. 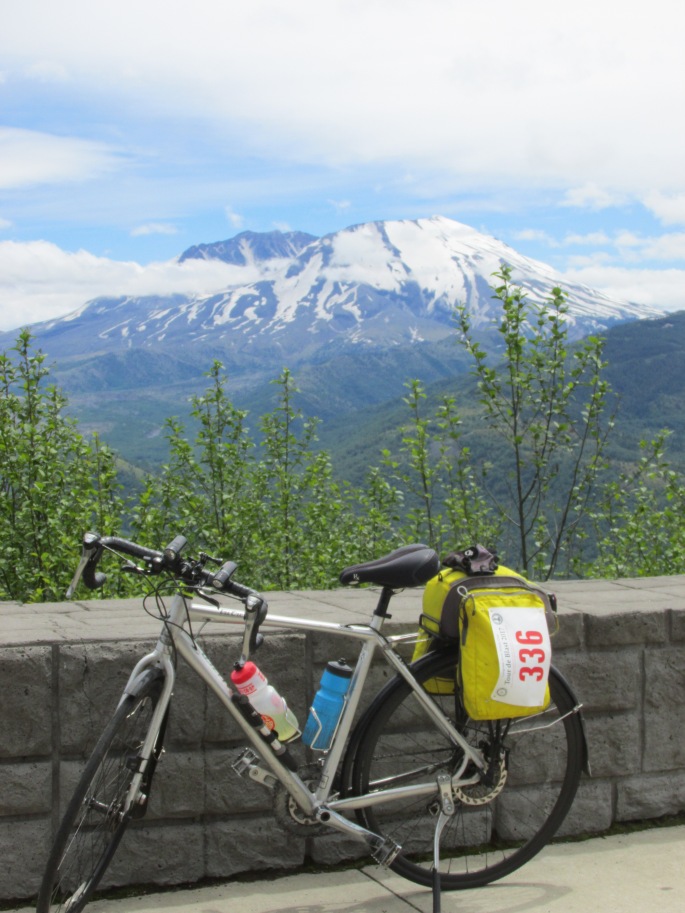 I was hoping for excellent video!

As I was riding, I reached up to turn on the camera for some cool river footage. I had made SURE to charge it the night before this time! It turned on, I hit the record button and nuthin!!!!

I pulled over in a driveway and found I had forgotten to put an SD card in the camera…  SUCK!!!  Oh well….

In July I rode the top of Chinook Pass.

I REALLY wanted some video this time. There is flat too much to see in Mr Rainier to pull over each time! I’d never reach the top. OK, you don’t have to hit me upside the head three times! Camera and backup battery charged, check! SD card in Camera, Check!! I was ready to go! and I did get some good video!

As I was riding back to town though, the camera started bouncing like crazy on me! It was attached to the handlebars (If you look close above you can see it) and it was acting like it was going to jump off the bike.  I grabbed it to try to steady it, and the mount snapped off in my hands!

OK, no more video today!! But no damage done.

But then I couldn’t edit the videos at home. It took a while to figure out I was WAY behind in Apple IOS updates on the MacBook. I thought the computer did that automatically…

September and Reach the Beach Washington came around.

Again, a new ride, and I wanted to get the GoPro video. Charged, SD card AND new mount triple check! I was excited to film reaching the water! However, along about mile 25 I heard something tumble behind me!

The guy passing said “HEY!! Your GoPro fell off!!”  Well….SHIT!! Luckily it wasn’t hurt and back in the saddle bag it went! The new mount snapped right off again!

I was not pleased! But I went to Amazon and took a look at new options, and found one that looked MUCH better! But after a year of issues, and no big rides to speak of I kind of forgot about it.

However, with this weekend being right before Halloween, and the fall colors out, I decided to do what I did back when I first bought it. I hooked it up to the bike for some easy rides along the Burke Gilman/Sammamish River trails I am DAMN glad I did!

First off, this dogs bike chauffeur was really moving!

Then there were some VERY interesting characters on the path Sunday.

As I passed these folks I couldn’t help myself, I yelled. “TATANKA!”

Here I showed my age! I yelled “LAND SHARK!” Since then Michelle and others, all of whom are much more hip than I informed me this is LEFT shark from Katy Perry.

This guy passes me all the time, but I rarely have the camera ready! In the rain this might be a nice bike, but I always wonder how hot it gets in the summer…

Snagging stills from the video has always been my favorite part of the GoPro. It also allowed me to get a great leaf, bike color shot!

But even with the GoPro along, one must also bring the real camera! This allowed me to get these shots!

Luckily storm troopers never hit what they shoot at!

Monday I was in the Seattle office, which I knew would have some great leaf color opportunities. Since the camera didn’t fall off the bike on Sunday I took a chance again!

There was this spooky rider….

But I was also lucky enough to get these shots showing Fall is in full swing!

So it seems, with just a little preparation,  I have solved most of the issues with the GoPro. (though I JUST realized I haven’t charged it since the ride Monday! BAD TONY) I will try and bring it along more often on my rides. These last two reminded me that it doesn’t have to be a BIG ride to see things you want to remember!