10 years ago this month, I started on a new stage in life, I became a cyclist. For the 13 years prior, I did my damnedest to be a mountain climber, and summit Mt Rainier. Over the 13 times, I tried 4 times to reach the top. Hence the name Mountainstroh. Sadly, no matter how hard I trained, this body of mine shuts down at 12,000 feet. Since Rainier is 14,410, that left me a wee bit short.

I can hear some of you thinking (you are LOUD thinkers!) “You have told this story MANY times! Why do it again?”

Well this week, Michelle found a thumb drive I thought I had lost, and on it were all my photos from that climb! Some, honestly, I didn’t know I had. So, sit back, and let me regale you with a bit more detail, and a LOT more photos, about my last climb…

Now, in addition to my attempts on Rainier, there was also one on Shasta (which for some reason truly no photo evidence exists) and one on Adams, in which I got stormed off, and my guide got lost. (See: The Worst Climb I Ever Had)

I had made it to the top of Baker though.

This means that by 2006, I had paid for 6 climbs (not cheap) and only made one. I was, in my head anyway, honestly done with climbing. I think my plan was to drink beer and get fat.

However, there is something funny about living in the Seattle area. There is NO way to avoid seeing Rainier

And you may not believe it, but this sucker calls to you. If you try to ignore it, it starts taunting you. And, finally, if you lose heart, it laughs at you!!

As 2006 rolled into late fall, the laughter rang hard in my head. I decided it was time for one more. I distinctly remember a day the mountain peeked out from behind the clouds. I looked at it, and said out loud, “I am coming for you!”

To which the mountain seem to reply:

I won’t go into the details of the training, but let me tell you, I pushed it hard. I was hiking hills with 40 lb packs and passing people on the trail who were carrying nothing. I was a machine!

Now, on Mt Rainier, or any mountain for that matter, weather is the ultimate factor. No matter how ready you are a storm can kick you off the side of a glacier. I learned early on the historically best window to climb was the weekend after July 4th. (The true start of Seattle summer).

However, to climb, the guide service, in this case Alpine Ascents International, requires you to go to climbing school. This serves a couple of purposes. The first are climbing skills you need to learn, including, but not limited to:

I CRUSHED climbing school, but then I had done it 6 time PLUS a week in Alaska the year before.

The second reason is to ensure you have been training. If you can’t handle the climbing school, you are dead in the water. They will cut you from the climb.

Well I passed, and was ready to go. The day of the climb, we met in Seattle, and were shuttled to Paradise Visitors Center in Mt Rainier. There we started gathering our gear. (I am in the back left with hands on hips)

I felt very lucky, one of my guides was Pete Athans, he had climbed Everest 8 times. That is a true climber! (seen here with me at high camp!)

The group I was with were all much younger than my 42 year old self. But the climb to Muir was well-known to me, and I rest stepped like a champ. At the midway rest I was feeling good. (climber trick, get out your snacks and water, then sit on your pack. Never stand when you have the chance to sit on a climb. (yep that is me in the orange))

When we got to Camp Muir I was in great shape. And we had great accommodations. (yep in orange again)

The next day we were able to sleep in, and then head to Ingraham Flats.  It took a couple of hours, but we left the snow and had to climb on a rock field, not fun…

Now, Ingraham Flats is simply a flat part of a the Ingraham Glacier. Glaciers can have crevasses. Some are huge. (Took this on my 3rd climb, lower down on the same glacier.)

But others are hidden. So the guides had us hang in one area

While they probed looking for hidden crevasses.

Once done, we were able to settle down and rest for the remainder of the day.

The accommodations were a bit more spartan.

But damn the view was amazing! (This is little Tahoma)

And this is looking up

Well, the safest way to summit a mountain is to have an alpine start. Leaving in the wee hours of the morning. The wake up shout came at 1 AM and by 2 we were ready to go. We travel by headlamp. I really wish I knew who took this shot! I love it!

From the flats, you climb to 12,500 feet, Disappointment Cleaver. Aptly named, as many a climber is done here….

I started strong that morning. I was feeling good, I ate well, I was hydrated and ready to go!! I stepped right up and started climbing. By the time I hit the cleaver, though, I was done… The guys I was climbing with couldn’t believe it. But the body shut down, and I felt like I was pulling them off the mountain (we were roped together as you can see above…)

My climb was done. I was told to sit and enjoy the view as they moved my rope team to other ropes. I just sat and watched the sun start to come up.

Then, after they started to climb I was led back down to wait.

When I got there, I crawled into my tent and took a nap. I was bummed….

Funny thing though, the first three times I felt like a failure, a loser, and pretty damn worthless. I trained for a year, and didn’t make it. This time, though, I took this photo.

Yep its a smile, tired and small, but a smile…

I woke up feeling good! Unlike the first three times, I KNEW I gave it all. there were no doubts about turning around too soon, or not leaving it all out on the field. There was flat NOTHING left to give. I wasn’t happy not to make it, but not sad nor devastated.

More importantly, I swear the Mountain smiled as well and gave a nod, he knew it was my best shot. There would be no more laughing at me…

Around 11, I spotted the rest of the team coming down from a successful climb!

The rest of my climbing team had made it! I high fived each of them! When I had seen them in the distance, I made a point to get my gear stowed, and out of the way. We still had a LONG climb down to the parking lot, and long drive home. I wanted to make it as easy as I could on them.

About 5 hours later, we made it back down to wait for the shuttle.

When I got home, I hung up the Ice Axe for the last time.

I think it was during the climb down I started thinking about getting a bike. I had an old one, but I started thinking I would need a better one. If I was truly giving up climbing, I needed some kind of exercise. A good bike could be the answer.

As the summer went on, Rainier was out every day, but I heard no mocking laughter or taunts. We had made peace with each other.

It took till Christmas to pull the trigger on buying the bike.  I knew I had always enjoyed cycling, and that I wanted to do more. I never dreamed how much I would and how it would change my life!

In fact the bike as taken me back to Rainier many times! 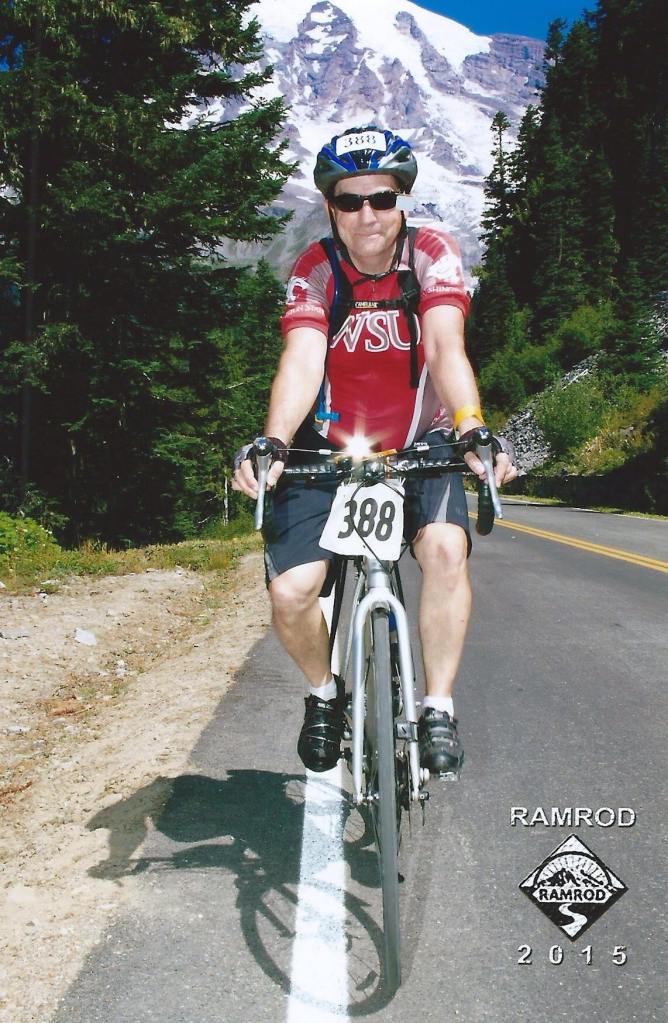 I won’t even try to lie to you, there has been time or two, when I look at Rainier and I wonder if I should try again. But this generally happens when I am on the bike and suddenly have a great view of it. Invariably, I smile to myself and give the mountain a nod. I am very happy with my choice.

I am a cyclist!

4 thoughts on “The Last Climb of Mountainstroh”