One week ago, from the time I am starting this post, Rob and I were almost 3 hours south of Centralia, and starting to cuss the rolling hills. As hard as a 200 miles ride is, the prep is just as tough. There are hours upon hours of training rides and being away from home. That means one weekend day is taken up with a ride and the other ends up being errand day. It aint easy on a cycling spouse to have someone gone that much.

Given that, the big training rides are over! Therefore we decided today would be a fun day to do something together we had never done.

Yep! it was time to soar into the wild blue yonder!

Just south of town is a tiny airport

Where, during the summer, there are biplane rides with Northwest Plane Rides. We see the plane flying a lot on weekends.

As we went to bed last night, the winds were whipping along, but it was clear outside.

The forecast called for the winds to die by early morning so we were sure we’d have good flying weather.

We got up, had coffee and breakfast, then puttered around the house a bit. Eagle eye  Michelle spotted this local family walking through the neighborhood.

The airport is NOT that big

And the wind was blowing pretty strong still

Reading on his website, Danna and his dad Ramblin Rod (for Oregonians our age this guy was the cartoon show host of years. Michelle watched him every day growing up) bought this plane in 1998, and it hadn’t flown in 70 years. It took them 10 years (Ramblin Rod passed away part way through) to fully restore the plane to its current perfect condition. (OSU Beaver fans will appreciate the Orange and Black, this was the original off the line colors)

We timed our arrival perfectly, as we hadn’t made a reservation. The plane had just landed from another flight tour, and there was no one there but us. We were soon ready to roll!

Can you tell we were excited? 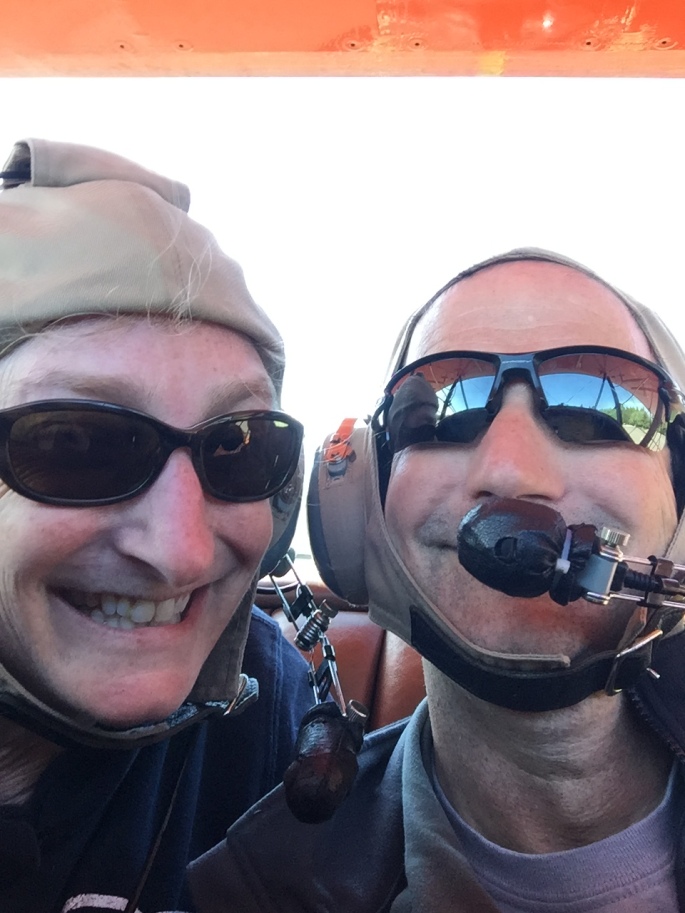 We of course couldn’t get a video of our take off, but Michelle took this of the next flight

And I got this at the same time.

The flight took us north toward Lincoln City. Michelle and I kept a good strong hold of the cameras while we were in flight.

We first went over Siltez bay

But then when we told him we lived just uphill, he buzzed out house for us! We are the blue one on the left.

This is a wider view, our neighborhood is just to the right of the football field near the right bottom of the photo, and you can see how close we to the ocean! Yes this does NOT suck!

It was a bit choppy when we took off, but once in the air it smoothed out a lot. As you can see we were right, it was a gorgeous day! 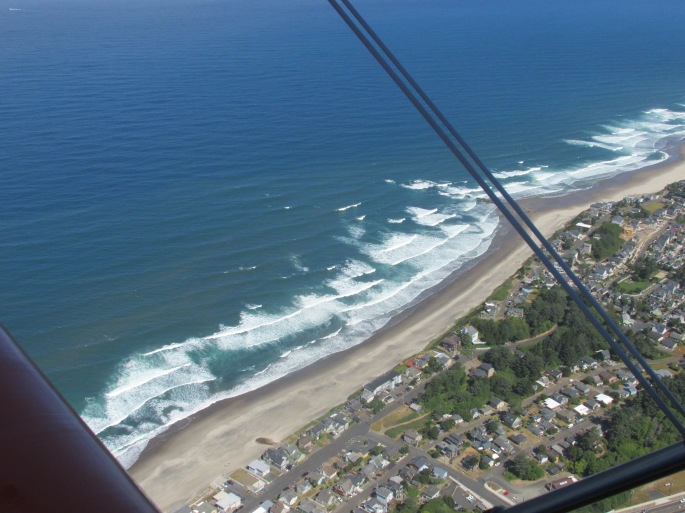 This is by far the smallest plane I have ever been on, and never once have I been in an open cockpit. I seriously expected it to be freezing cold as it was only about 61 degrees at the time, but we were pretty darn warm. Danna did an excellent job telling us about town, but also giving us time to just look around and enjoy.

This was one of my favorite shots. We love the Inn at Spanish Head, and here it is from 1500 feet!

I know for a fact that I was smiling for the full 25 minutes we were in the air. I just kept looking from side to side at everything. Not just the ocean, but the rivers as well.

This may truly have been the fastest 25 minutes ever, and way too soon we were coming in for a landing.

During the flight, he pointed out some other routes that would be even more fun, including all the way to Haystack in Pacific City.

Folks I highly recommend this! We have a much better understanding of our new town, and pure and simple, it was just plain fun!

Danna and his wife Tami were the nicest people. They made us feel like they truly enjoyed taking us on the flight.

Sometimes, and today was one, it is just fun being a tourist in your own town. Michelle spotted this and had the brilliant idea that we should do it! At the end of the flight, I was still smiling, my face was tingling from the wind and I was starving! Evidently having fun makes you hungry!

We will do this again! Next time, though, I can only hope I look as good as World War I flying ace Snoopy!