We’ve all been there. When you do something a lot, and you are good at it, you forget what it was like when you were just learning.

I am reminded of this a lot on the Oregon coast.  It may surprise you to know I am not talking about bike riding. I am talking about spotting whales. 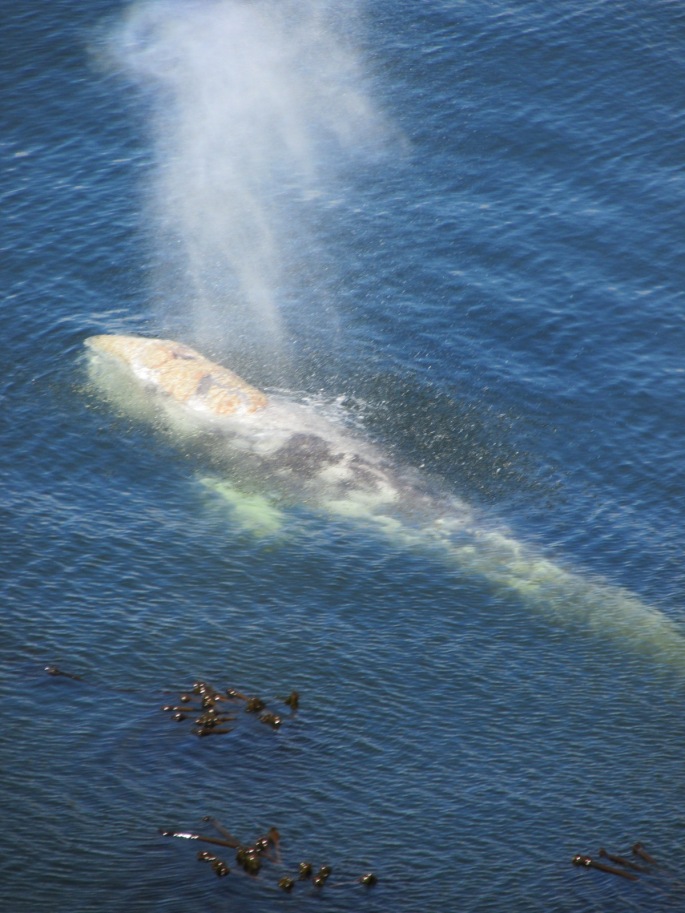 Here on the Oregon Coast, especially within easy cycling distance of Lincoln City, we are spoiled when it comes to whales. We have a group of 40 – 50 that live here year round. What makes it special is that they are often very easy to see from shore.

As you can see from the photo above, there are times you can’t help but see them. This guy was 10 feet from shore.

Even if you had never seen a whale before, there is no way not to know what this is.

Most of the time, though, they are much farther out. The first indication they are there is normally the spout. Not this spout

But the ones from the whales themselves.

On my bike ride Thursday after work, I was hanging at Depoe Bay for a bit to see if I could spot whales

There were a few out there a ways. But nothing close in. I was getting ready to leave and head further south, when a couple came up to me.

The lady said, “I bet you can help me! I wouldn’t know a whale if I stepped on one! What and I looking for?”

I have no idea why she thought some random cyclist standing at the sea wall would know anything, but I was happy too.

I had to laugh, though, when she told me that the live in Westport, WA. This is a town right on the Washington coast. There they are, at the ocean like I am, but they just don’t have whales.

So I started to explain.

The spray of a whale when is spouts is a very fine mist, that can seem to hang in the air.

Then, when you see the spout, you keep watching that spot. Then you might see more, as you see below.

By the way, these are two different whales and days. The shot above was a last summer., the one below was Thursday. There have been a lot of big waves and this guy was swimming in a kelp bed.  Shows you how the water can change too.

After explaining it to her, we started watching. Sure enough, two popped at the same time and I could point them out.

And then the magic happened…

Once you know what to look for, you can spot them every time.

Sure as hell, the whales started to spout, and she started seeing them time and again.

She then turned to her husband and punched him hard in the shoulder. “I TOLD you I was seeing whales!”

They had an Oceanview hotel room, and she had been seeing these spouts. They just didn’t know what they were seeing.

I had to laugh.

So here is a test, how many spouts do you see?

A cool story about this video.

The whales were putting a show that night. They were everywhere! As I was leaving another cyclist came up from the rock he was sitting on. He walked up to me and said. “Last night I camped with 6 raccoons. Today, I saw 6 whales! My day is full of animals and my heart is full!”

So one last note on whale watching. When you see the spout, and then the back, you can see which way they are going. Its even easier when you see them spouting a second time. They will generally keep going the same way. This makes it easier to have your camera ready.

However, if you see whale tail.

All bets are off. The tail means they are going deep. They may change direction, keep going straight, or leave entirely. Seeing the tail can be the highlight of watching whales. But it can also be the end of the show.

I really don’t remember the first whale I spotted. However, Whether walking, riding a bike, or even in a car, I see them all the time now. The spray from the whale is unique enough that it can’t be mistaken!

And, sometimes, you get rainbow spout!

So there you go, your whale watching lesson. I hope it helps!

And if you are ever on the coast and have questions. feel free to ask a cyclist. We are pretty darn smart!

Last week, not knowing it, I ended up talking to the parents of the college friend of Michelle’s! Good thing I wasn’t a jerk to them!

5 thoughts on “Spotting the spout”