When I am at work and talking with other insurance companies, quite often I get asked by the big national insurance companies where the Mighty P, the company I work for, is based out of. Almost invariably, when I say Seattle, I hear. “Does it REALLy rain there all the time?”

I of course say YES IT DOES! We want people to think it looks like this

We try not to let people know that a lot of the time the Northwest really  looks like this!

If keeps down the crowds you know.

However, for as much as it does rain in Seattle, the Oregon Coast gets even more. Which makes it challenging to to be a cyclist here…

Now lord knows I have ridden in the rain

But it is not my fovorite thing to do. If I am out on a ride and the rain hits, I keep going. But gotta tell ya, it is hard to leave a warm comfy house to start a ride when it is raining out there.

The first week of the year has been particularly challenging for riding. Here we are January 7th, and our back yard rain gage says we have had 5.32 inches of rain already!!!

To combat this, I have old reliable set up in the garage.

And in fact, I just cranked out 20 miles while watching Dirk Pitt and Al Giordino pull a Panama. It keeps the legs moving, and it’s helping burn off the extra food and wine from the holidays, but it aint fun…

However, last Saturday there was a window!

Michelle and I had gotten up and went grocery shopping pretty early. Then after breakfast, I looked outside and it was pretty darn clear! I looked at the weather app we use and it said I had a couple of hours before the next rain spurt! (Let me just say the app is NOT always correct)

I was saddled up and out the door in 10 minutes. Two hours was plenty of time for Depoe Bay run and back, about 20 miles!

As I left town, the sun was actually shining a bit.

It looked like I was making a good choice!

So south I went, but I was fighting a headwind. This time of year, especially on raining days, the winds are out of the south. However, if you live on the Oregon Coast and only ride when it’s NOT windy, you would never leave the garage set up you see above.

I ducked my head and kept those feet a turnin.

At 8 miles, I hit a bit of rain, but not too bad, and I was too close to the turn around to stop anyway. Luckily, by the time I got to Boiler Bay it had stopped.

My route was Lincoln City to Depoe Bay, 10 miles south, then turning around to head north back home.

When I stopped at Boiler Bay to check for whales (its something I do every ride) I looked back north toward Lincoln City and home and saw this.

That big ole dark cloud was essentially covering my house!! It was raining so hard at home that Michelle called me to see if I had had gotten drenched and needed a ride home (YEP, I am lucky to have her!) But I had gotten far enough south that it I missed the downpour. YAY ME!

I left Boiler for the last mile to Depoe Bay, and the winds had picked up something fierce!  I was in a low gear just to make forward motion at time.  It’s a great way to build leg muscles!

I got there and looked out to sea, and the waves were crashing pretty well.

But then I looked farther south and saw… 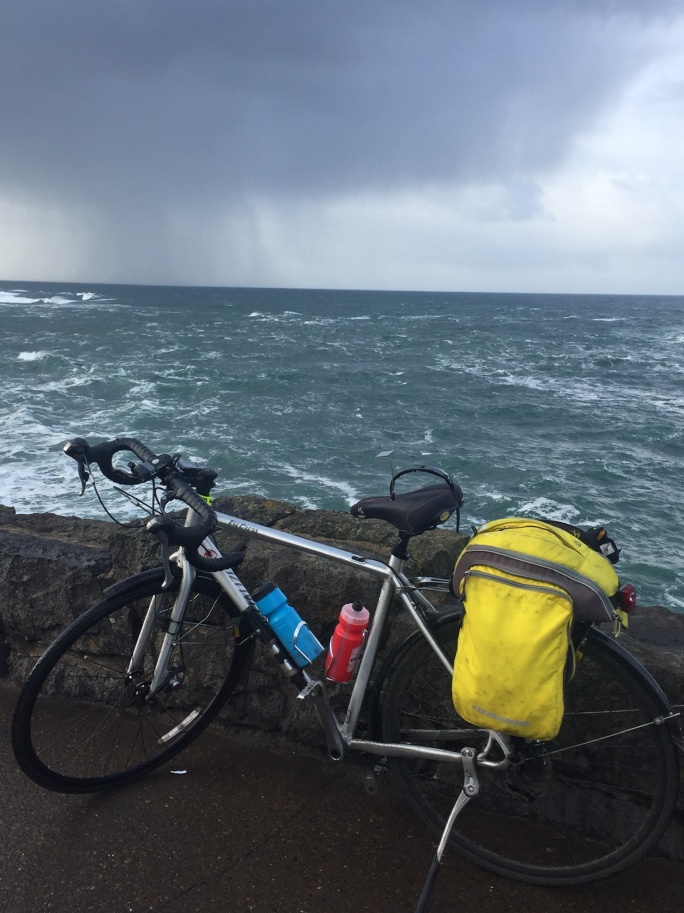 Yep more was a comin! This time right at me…

It was time to head home. Funny thing. You know those headwinds I was complaining about? When you turn around to go home, they become tailwinds! The same winds that were pushing the rain toward me, were helping me pedal faster than normal. I easily made it home before the squalls hit!

Sure,  I coulda played it safe and rode inside. In fact last December I didn’t have a single outdoor mile! But I will take 20 miles outside in the fresh air ANY day over the 20 in the garage. All miles are good miles, but outdoor miles are SO much more enjoyable.

Who knows if I will get another window this month, but its only 2 months from tomorrow that Daylight Savings time starts and after work rides can happen again! things to look forward to!

4 thoughts on “A short window of opportunity!”